Interview and Photography by Pravin Nair. Lotto by Reddi Rocket ft Lunadira is out now on all streaming services.

As I pulled up to Patina by Three, a very quant and homely-looking cafe, I noticed its co-owner Reddi sitting outside with his peers, with a cigarette in his hand, deep in conversation. His color coordinated outfit was  The words “Come Vibe With Us” on his white t-shirt came in handy.

Reddi is not one to shy away when it comes to new experiences.  That being so, in celebration of the release of his new single “Lotto” with artist Lunadira,  it was the perfect opportunity to sit down with Jimmy or F.K.A Reddi Rocket to discuss his upcoming track, fashion, coffee, and suchlike. To tap into what makes him Reddi Rocket, the artist we should all be listening to.

HOW DID THE STAGE NAME REDDI ROCKET COME ABOUT TO YOU? Haha! Okay, so it’s a two-part story when it comes to my stage name. Reddi comes from the beginning, from when I first started making music. I started to delve into music genres like house music, hip hop… I even did a bit of Drum & Bass. Its gonna sound a bit corny but the name Reddi is my version of how I’m always ready to try on new things, be it in music or in life generally. Rocket, however, comes from a favourite movie of mine, it’s called City of God. The movie centres around two best friends, one named Rocket who is always documenting everything in regards of his friend, but somehow always remaining in the background of things. That’s how it comes together… Reddi Rocket, How I’m always everywhere but I’m not really a part of it.

HOW DID YOU GET INTO THE MUSIC INDUSTRY? TALK TO US ABOUT YOUR JOURNEY. I started off by playing music in a band in high school with a bunch of friends. From then on, I decided to become an independent entity by making and producing my own music. Then, I decided to post my music onto soundcloud, and it started to gain some traction. A number of producers started to notice me and the music that I had put out and they asked me to take part in the beat cipher by Midnight Oil. So, what happened is that I was given a sample of a song, at a certain BPM that I had to follow, and I made a minute-long remix of the given sample. From then on, I was asked if I wanted to partake in their collective called AKHYLA. I kept on producing with them, creating new music, and before I knew it, I had people coming up to me to do shows, gigs and DJ Sets, and now I’m here.

HOW WOULD YOU DESCRIBE YOUR CREATIVE PROCESS IN REGARDS TO MAKING MUSIC?  Prior to this, it was always me trying on new things, be it new beats, skills and types of new styles of music and all of that. But since then, I’ve been focusing on making what makes me feel in that moment. I try not to think too much when making music. I feel like when I end up thinking too much, I get stuck and never end up finishing my work. So, I’m doing things slowly; finding the right instrument, beat, vocals and always going with the flow. It’s really based on the idea before making music and how I’m feeling in the moment.

DO TELL US ABOUT YOUR SINGLE THAT HAS JUST BEEN RELEASED!  Honestly, the song is about taking leaps and gambling on things. I named it Lotto because I was trying to convey the message of gambling and the feeling of doing something against your beliefs. However, when it’s done right, like any gamble, you can get a great deal of satisfaction. When I wrote it at the time, it was more focused on dealing with a toxic relationship and the gambles that I took in that relationship. Basically, the track describes how I am self-aware of the issues that’s happening but also of how I’m stuck in it.

IS THERE A MUSIC VIDEO COMING OUT FOR THE TRACK?  Okay, so as of now, JujuJahat, my manager says that there isn’t a music video in the making. We will however consider making one if the song gets a lot of traction. So, maybe!

HOW WOULD YOU DESCRIBE YOUR MUSIC IN THREE WORDS?  Super, Musical and Frisson. Frisson is basically when a person listens to music and they’re feeling the beat. So even a pluck of a string on an instrument could give me goosebumps.

WHAT IS YOUR PERSPECTIVE ON COLLABORATING AND WHAT MAKES YOU A COLLABORATOR? I KNOW YOU’VE COLLABORATED WITH LUNADIRA ON A PREVIOUS TRACK AND IT WAS SICK. DO TELL US A BIT ABOUT THAT. Thanks! Honestly, collaborating with me is such a new process, for me. I had never actually collaborated with artists in a studio. It was always carried out over emails or projects that are given to me. It’s only very recently that I’ve been collaborating with artists in the studio. It’s refreshing honestly. I’ve been doing this for a while though the process of making music can be tough sometimes when done alone. Collaborating has helped me share a lot of ideas with my peers back and forth and that has helped me grow a lot as an artist and a producer. And what makes a good collaborator? I think it’s when they’re not holding anything back, just constant flow of ideas back and forth and everyone’s ego left at the door.

CAN YOU TAKE US BACK TO MEMORY LANE AND TELL US ABOUT SOME OF YOUR EARLY MUSIC CAREER MEMORIES? HOW HAS THAT SHAPED YOU EVER SINCE?  Oh, this one is tough. I wouldn’t say music career but more of my earliest memory of music would be when I was younger, I never focused on the lyrics. To me, back then, vocals were always an accompanying piece to the music. To me its sonically great music over lyrically great music. It’s always been that until very recently.

COOL! WHAT ARE THE UPCOMING PROJECTS THAT YOU ARE WORKING ON?  My EP! I’m really excited about it and I can’t wait to release that. Lotto is the first single off that EP. I’m also trying to get it all released before GoodVibes. I’m hoping to perform at the festival so, FINGERS CROSSED!

I HEAR THAT YOU’RE ALSO A BARISTA AT PATINA BY THREE! HOW DO YOU JUGGLE BETWEEN MUSIC AND COFFEE?  Yeah, I am! I try to relate whatever it is that I’m doing with something else that’s significant. So, in this case, when I make music, I drink coffee and when I’m making coffee, I listen to music. Plus, I own the café, so I get to make music and coffee at the same time. It’s more of a symbiotic relationship with what I have with music and coffee. To me, it’s very hand in hand with each other.

OK REDDI, LAST QUESTION. WHEN DID YOUR IDEAS OR OBSERVATION REALLY BECOME A GUIDING TOOL FOR YOU TO USE NOW? WHEN DID YOU BEGIN TO ACKNOWLEDGE THESE INFLUENCES?  I mean, to me, these ideas came to me when I was young, and I take a lot of inspiration from what I see around me and what I’m feeling. My music is an extension of who I am and I do not necessarily always have a rigid guiding tool to making music, but the one thing I always go back to is the way I am feeling and how I can incorporate that into my music. 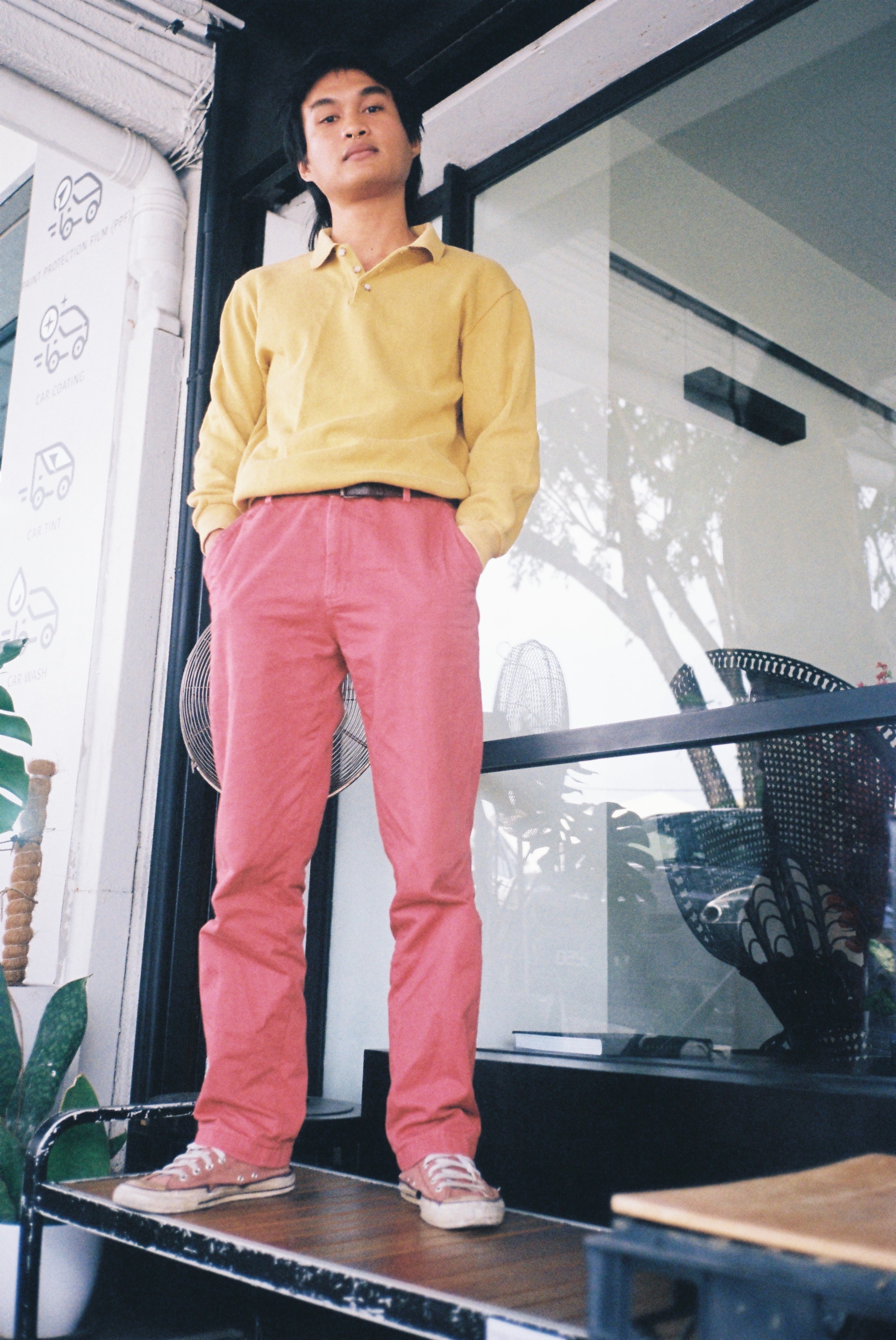